View Item
JavaScript is disabled for your browser. Some features of this site may not work without it.

Colombia's Efforts at Achieving Inclusive and Sustainable Growth: The Road Traveled and the Challenges Ahead 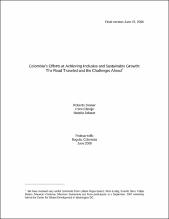 Repor_Junio_2008_Steiner_Clavijo_y_Salazar.pdf (Colombia's Efforts at Achieving Inclusive and Sustainable Growth: The Road Traveled and the Challenges Ahead) (247.6Kb)

"At the end of the 1980s Colombia confronted a situation of low growth and an unsettled domestic security situation. In order to address these issues, a comprehensive reform effort was undertaken starting in 1990. The reform agenda comprised market-driven reforms aimed at enhancing competition and the role of the private sector as well as a vast array of institutional reforms aimed at strengthening macro stability, promoting equality of opportunities in the political and judicial arena, and broad sharing the benefits of growth across regions and individuals. In this paper we show that this ambitious reform drive proved to be very challenging, with reforms aimed at strengthening some foundations for growth actually weakening others. Restrictions from the local environment and issues of design did not allow many of the reforms to fully deliver on their promise. In particular, the benefits of having broadened opportunities through fiscal decentralization, the enhancement of social expenditure and the expansion of access to the judicial system, must be contrasted with the fiscal deterioration and the rise of macro vulnerability that ensued. Starting in 1999 three governments tackled some of the salient problems. While this effort, coupled with a supportive external environment and improved security have delivered a favorable economic outcome, challenges remain in order to further strengthen the foundations for growth. This paper will provide proposals to that effect, with emphasis on the need to remove some of the limitations imposed by the local environment, particularly those arising from a very active judicial system."